The first meeting of the English League Cup semi-final between Arsenal and Liverpool will take place on 6 January. 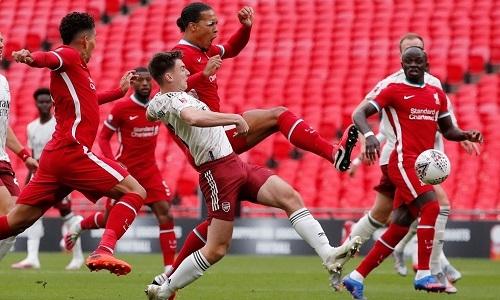 The Gunners have won the English League Cup twice (1987 and 1993). The Londoners last reached the final in this tournament in 2018.

In the last matches of the Premier League, Arsenal defeated Norwich (5: 0), and then lost to Manchester City (1: 2) at home.

After 20 Premier League matches, Arsenal is 4th with 35 points. The goal difference is 33-25, Emil Smith-Rowe scored 8. El Nenni, Pepe, Kolasinac, Parti, Aubameyang, Magalhaes will not play, Nketia is in question.

Liverpool, like Manchester City, have had the most English League Cup trophies – 8 times each. But the last time the team won this tournament was in the 2011/12 season.

In the last matches of the Premier League, Jurgen Klopp’s charges lost to Leicester (0: 1) and drew with Chelsea (2: 2).

After 20 rounds of the Premier League, Liverpool is third with 42 points. The goal difference is 52-18. Minamino, Origi, Phillips, Salah, Mane, Elliot, Alcantra will not play. Firmino, Allison, Matip and Klopp himself are in question.

In the English League Cup, Liverpudlians are unbeaten in regular time in 5 matches. We predict that in this meeting tooLiverpool will not lose in regular time…

Predictions for Sport 0
The last time Chelsea beat an opponent at home was over a year ago.

Predictions for Sport 0
Forecast and bet on “Changchun Yatai” – “Shandong Taishan”, statistics, odds. In the 22nd