Borussia will host Hoffenheim in the 3rd round of the Bundesliga. The match will take place in Dortmund on 27 August. 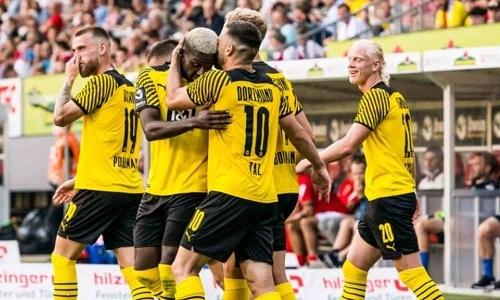 For Borussia Dortmund the season began with the German Cup match, in which the team managed to beat the representative of the third division Veen with a score of 3: 0.

Then Dortmund started in the Bundesliga – in the first round the team defeated Eintracht Frankfurt with a score of 5: 2.

After that, things got worse. First, Borussia lost to Bayern in the match for the German Super Cup (1: 3), and then in the championship on the road lost to Freiburg (1: 2).

As a result, after two rounds in the Bundesliga table, Dortmund took seventh place.

Hoffenheim did not lose at the start of the season – the team has two wins and one draw.

As part of the German Cup, Hoffenheim passed the team from the third division, Victoria Cologne, having won with a score of 3: 2.

In the championship, “Hoffenheim” first defeated “Augsburg” with a score of 4: 0, and then broke the world with “Union” – 2: 2.

4 points in two matches put the team in second place in the Bundesliga standings, just behind Bayern Munich.

Hoffenheim are a tough opponent for Borussia. In the last ten meetings of the teams, Dortmund won only three times with three defeats. It is unlikely that the new meeting of the teams will be an easy walk for Borussia.

The forecast and bet on the match is a draw in at least one of the halves with the odds of 1.86.