Eintracht F will play at home with Mainz in the 17th round of the German championship. The match will take place on December 18. 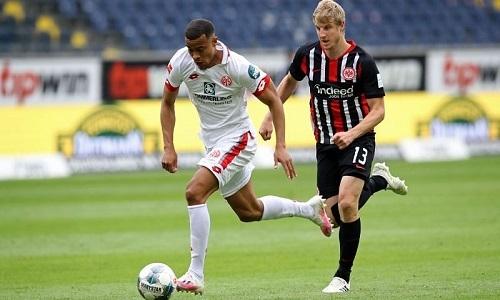 Eintracht Frankfurt is traditionally fighting for the European competition this season. After a series of unsuccessful matches, Frankfurt moved up to 7th place.

In the last round , Eintracht F got three points. On the road, the team defeated Borussia Mönchengladbach (2: 3).

This Victoria became the second in a row for the team in the Bundesliga. And before that “Eintracht” smashed the strong “Bayer” (5: 2).

Mainz is a real evil genius for Frankfurt. Of the last five head-to-head matches, three ended in defeat for Eintracht Frankfurt, with one victory.

This team this season is a candidate for the European Cup places. Now “Mainz” is just in the required 6th place.

The main feature of the team is a successful defensive play. In 16 matches, only 16 goals have been conceded, which is one of the best indicators in the league.

By the way, Mainz won in the last round . Hertha was defeated in a beautiful style (4: 0).

True, the team does not play so well on the road. Probably, Mainz will experience difficulties in this match as well.

Eintracht F is on a psychological rise.

The hosts will surely be actively storming Mainz’s defensive lines. Our forecast and bet – Eintracht F wins with odds 2.25.