Nantes take on Rennes at the Stade Beaujoire on 11 May. This is the final match of the 36th round of the French championship. The visitors are very motivated. Will it help them clinch 3 points? For full information and all odds for the match, look at download 1xbet app. 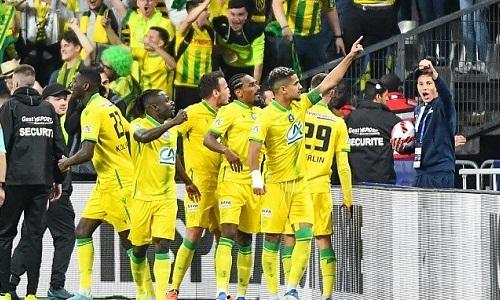 A couple of days ago, Nantes beat Nice 1-0 in the French Cup final. It can now be officially stated that this season has been as successful as possible for the Canaries. It makes absolutely no difference at which position in the Ligue 1 table the team finishes. Let me remind you that the Canaries are currently sitting in 9th place, with 51 points on their books. But even if they manage to beat Rennes now, they won’t be able to go any higher. The gap from 8th place is 4 points.

Nantes have been doing pretty well in Ligue 1 recently. Thus, in the 6 previous matches the team lost only once, with 2 wins and 3 draws.

Throughout the season, the Greens have been performing well at Stade Beaujoire: 10 wins, 3 draws and 4 defeats. 30 goals scored, with 18 conceded. The last home game ended in a 5-3 victory for the team over Bordeaux.

Rennes have picked up 6 points in the last 2 rounds. However, Bruno Genesio’s side have failed to return to the Champions League zone. They remain in 4th place, with 62 points on their books. The gap from the top 3 is 3 points. In addition, the gap from 5th Strasbourg is 2 points. But if they manage to beat the Canaries now, the Bretons will equalise on points with the Monegasques, who have played one more match.

Rennes are one of the best teams in France in terms of their home-field results. Their away record is that of a typical average team: 6 wins, 4 draws and 7 defeats. 29 goals scored and 23 conceded. They have scored 22 points in 17 games.

I cannot fail to mention that the Red-Blacks have already scored 77 goals. In Ligue 1, only PSG are more productive (81 goals).

In the first half of the season, Rennes scored a narrow 1-0 win at home to Nantes.

7 of the 8 previous head-to-head encounters between the teams in Ligue 1 ended with not scoring more than 2 goals (drawn by TM 2.5).

The 11 previous head-to-head encounters in Nantes ended like this: 6 Breton victories, 4 draws and just 1 win for the Canaries.

Nantes players must be in euphoria right now. After all, for the first time in more than 20 years, the team has won a trophy. It’s hard to say how such a state will affect the team’s results in Ligue 1. But I would not risk betting on the Canaries at the moment. Simply because the Bretons need the win more. Plus, they’ve been very good at Stade Beaujoire in recent years (only 1 defeat in their last 11 games).

My prediction. The bookmaker believes in the visitors’ success. And I, too, suggest you bet on Rennes to win – Win 2.