Real Madrid will play at home against Atlético in the 17th round of the Spanish Championship. The match will take place on December 12 at the Santiago Bernabeu. 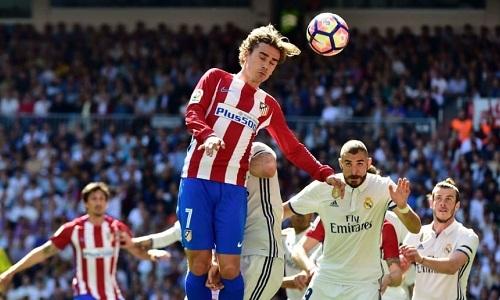 Real Madrid single-handedly lead the table in La Liga , gaining 39 points in 16 matches. The gap from the nearest pursuer is already eight points.

Earlier this week, Club Royal beat Inter Milan 2-0 in the final round of the UEFA Champions League group stage.

Interestingly, Real have dealt with the Italians without Karim Benzema , who missed the game due to injury. It is not yet known whether the Frenchman will be able to play in the Madrid derby.

The winning streak of “Real” is already nine matches, and the unbeaten – 12 (11 wins and a draw).

“Real” have never lost at home in the current championship.

Atlético meanwhile are in fourth place. After 15 matches played, the “mattress” players have 29 points.

For Atlético, the key this week has been the Champions League encounter with Porto. And Diego Simeone’s team did everything not to become the main disappointment of the tournament. Thanks to the victory over the Portuguese (3: 1), Atlético still made it to the Champions League playoffs.

And there is a suspicion that the game in Portugal took a lot of strength from the Atlético players. It was one of the most nervous matches of the season in Europe. Unsurprisingly, the referee ended up showing three red cards, one of which went to Yannick Carrasco.

In La Liga , Atlético is not impressive this season. Oddly enough, Simeone’s gang is too often let down by defensive mistakes. Last week, Atlético unexpectedly lost at home to Mallorca (1: 2). Here you can add defeat to Alaves and draws with Levante and Valencia.

The upcoming match against Real Madrid will be missed by Luis Suarez , who was injured in the game with Mallorca.

The Madrid derby has rarely been successful lately. In only one of the previous seven (official) matches between Real Madrid and Atlético, more than two goals have been scored.

But at the same time, it was obvious every time that Real was playing better. Atletico, on the other hand, every time tries only to interfere with the opponent. And this time we are unlikely to see something new.

This Atlético Madrid cannot boast of a super solid defense and still do not impress with their inventiveness in attack. Most likely, Real will win by one goal.

You can also consider the bet on the goal of Vinicius Junior ( 3.40 ). The Brazilian is having an incredible season.